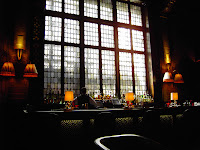 A couple of my oldest friends are making great progress in launching their business into the US market which is not only great news for them, but also for me as it means they have to make frequent business trips to New York as a result.

This gives us the opportunity to leisurely catch up over several evenings, rather than the usual crazy schedule I have when I visit London as I always try to fit it seeing as many friends as possible.

So when my friend SM spent a week here for meetings after attending South By South West in Austin a few months ago that's exactly what we did. We pretty much spent every evenings together and SM gamely followed me on a tour of some of my favourite New York haunts, from live Jazz at The Garage to expensive but exquisite sushi at Gari's, all the way to late night drinks at Hi-Life. But we also went to a place that had long been on my list to try - The Campbell Apartment in Grand Central.

Drinking in a train station may sound far from glamorous but Grand Central is probably the most beautiful, serene and grandiose station in the world and I love having fiery Bloody Marys at Cipriani on the raised concourse while watching the world go by. But this time, I wanted to try something different and SM and I made our way (with some difficulty as it is hard to find the entrance) to the Campbell Apartment instead.

The strict dress-code (no jeans or t-shirts) ensures that this grandiose drinking den is fairly clear of tourists. The "apartment" was the former office of rail road executive John W Campbell who had it built in 1923 to resemble a 13th Century Florentine palace. It takes a few minutes for your eyes to adjust to the darkness but entering this space is like stepping back in time, complete with an atmosphere of quiet and old-world luxury. One almost feels in a museum and we almost reluctantly raised voices above whispering level when asking the hostess for a table. Their cocktails are also to die-for.

SM is coming back to New York in a few weeks time and has already requested that we go back. I shall gladly oblige of course.
Posted by Stephanie at 5:34 PM

Wow, sounds amazing I will be adding this place to my list too!