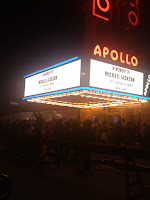 Marie, Libs, Caroline and I are embarking on our much anticipated road trip together tomorrow morning. We will be driving South over the course of a week, loosely planning to stop over in Baltimore, Blacksburg VA, Pigeon Forge in the heart of the Blue Smoky Mountains, Nashville and finally Memphis before hopping on a flight back to New York. I will no doubt be blogging about the trip upon my return, but we've already had a spectacular start.

We picked up our rental car at La Guardia airport tonight, a sleek and sexy Chryster Sebring convertible with the tiniest trunk ever designed once the roof is down - we are going for looks rather than practicality here, much in the same way we tend to pick our men come to think of it!

Marie bravely volunteered to drive us back to the City even though, like the rest of us, she had never driven in Manhattan before. After spending some time getting used to driving an automatic (as it turns out, using your "otherwise unaccustomed to being left idle" left foot to brake is really not a good idea!), we confidently set off, admired the view of the glittering skyline as we crossed the Robert Kennedy bridge and entered the City in Spanish Harlem.

We drove West on 125th and upon nearing the Apollo Theatre, we heard Michael Jackson's "Wanna be starting something" loudly playing in the street. The traffic slowed to a stand still in front of the famous landmark which was packed with crowds of fans waving pictures and banners, singing and dancing to the music while all the surrounding cars were beeping in unison. The atmosphere was electric, somewhat surreal, but I was happy to see people publicly celebrating his work rather than breaking down hysterically.

What a perfect way (and soundtrack) to be "starting something", even more so when it is a trip to America's historically laden Deep South with great girlfriends.
Posted by Stephanie at 12:20 AM 1 comment: 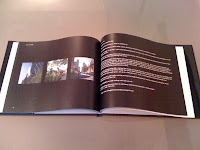 At the end of my first year of blogging, I came across a website called blurb.com which enables you to turn blogs into customized, high quality hardcover books relatively easily.

Despite a slight guilty feeling of self-indulgence, I couldn't resist and have since got two books printed from the posts I published in 2007 and 2008. It's a little treat for myself - I really enjoy leafing through them from time to time, looking at the pictures and reminiscing about the experiences I have been through and the events I have been lucky enough to witness since moving to New York, such as Obama's historical victory.

But above all, if I do eventually leave this wonderful City, the books will be original mementos of my time here ... tangible traces of my adventures and fluctuating state of mind.

So go on, treat yourself as well - I highly recommend it.
Posted by Stephanie at 7:14 PM No comments: