I have always found the gym to be an absolutely fascinating place for people watching - it is unnatural to put human beings of all ages, shapes and sizes in a small space, make them frantically exercise and watch them turn all shades of red while they carefully avoid looking at each other.

As my "February Fitness" burst is still going strong, I have had plenty of opportunities to observe some of the differences between gyms in New York and the ones in London and so far have identified three of them.

1. An unsettling amount of public nudity in the Ladies locker room
I am no prude but I consider it normal that, after having a shower at the gym, one should try to remain covered under towels while discreetly changing back into clothes. It does involve some amount of contortion and dexterity but it is feasible. However, training in the art of not unecessarily exposing one's private parts is not evident here at all.

I have not seen so many naked women since I went to the famous Gellert Baths in Budapest - an experience I found so traumatic at the time that I only lasted 20 minutes in there ... There was only a limited number of times I could deal with rather mature ladies insisting on bending over to pick up seemingly invisible objects from the floor!?!

I am getting slowly used to NYC women's lack of self-consciousness and their general disposition for doing as much as they can completely stark naked - be it leisurely walking around the locker room, chatting to each other for ages or even drying their hair and applying make-up! In fact, I applaud them for that ... but won't be joining them anytime soon!

2. Male bonding
I hate going to the gym when it is packed so I have taken to exercising early Friday evenings, which has lead me to another observation. This particular time slot seems to be the primary setting to the new phenomenon of "man dates". Throngs of men invade the gym at that time and it is endearing, albeit highly amusing, to see them exercising on the weight machines in pairs, coaching and encouraging each other while slyly comparing muscle size. My personal theory though is that they are merely "pumping up" before going out on the pull ...

3. Halfhearted exercising
And finally, I have also been shocked at the number of people who exercise with a Starbucks coffee in one hand and a cell phone in the other. As usual, New Yorkers are uniquely masterful at multi-tasking.
Posted by Stephanie at 9:12 PM 3 comments: 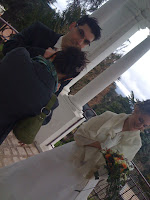 At 27 years old and standing nearly 6 foot tall, there is nothing remotely little or baby-like about him but to me he will always remain the fragile little thing my parents brought home from the hospital when I was 6 years old.

While the vast majority of my coupled-up cousins skipped the wedding step altogether in favour of immediate procreation, my brother was always the more traditional one in our family so it was not a surprise when he announced his engagement to us last year.

I think I have already mentioned that I have a large family as my mother has 10 brothers and sisters, who in turn have up to 3 children each, so the wedding was not a simple affair. Add to that a lot of family friends, as well as Julien and Catherine's own friends, and you are left with an awful lot of people to entertain.

The day started early as my sister & I had our hair done at 8.30am at the local salon. It was quite surreal for me to go back there after a 13 years hiatus but the salon owner (who used to cut my hair when I was a teenager) looked after me and when not lamenting the fact that I don't do anything special with my hair (thanks!), literally bombarded me with questions about my life in London and New York.

We then headed back home and Julien picked us up so we could meet his future wife in a nearby picturesque village for the official wedding pictures with a professional photographer. My sister and I were the "little helpers" during the shoot - our job being to alleviate their pre-wedding nerves, re-arrange Catherine's dress or Julien's tie for the photos and generally carry umbrellas, coats and scarves ...
This was actually the best part of the day for me - Julien, Catherine, Laurie and I are very close and spending that time together as a tight unit, away from the rest of the wedding party, fooling around and laughing was very special for us. It was also when we shed our first tears of the day as Julien welled up when he saw Cath in her wedding dress, prompting us to spontaneously burst into tears at the sight of him crying.

Traditional French weddings follow a long established pattern. They start mid-afternoon with a civil ceremony at the local Townhall, followed by a Church blessing, a "vin d'honneur" (drinks essentially) and finally the wedding dinner and dance - all of which with their own etiquette regarding the guest list.

While only very close friends and family are invited to the civil ceremony (primarily because townhalls tend to be small), a much larger group is welcomed to the Church blessing and the vin d'honneur, in this case just over 200. Catching up with so many people was overwhelming and, I have to admit, rather tiring as I found myself delivering a set of standard answers to the exact same questions that were asked of me: "What is New York like?", "How is the economic crisis affecting you?" and of course the dreaded "Why aren't you married yet?". I had fully expected the latter question (tactfulness is not always a quality the French possess, at least not in my family!) and had already prepared a flippant answer to that one: "One has to kiss a lot of frogs to find a prince and I'm having a lot of fun doing just that!". Not entirely true anymore these days as I gave up frogs, princes and anything in between for lent (ha ha!) but seeing their shocked faces provided me with endless amusement.

The dinner and subsequent party are the best part of the whole affair of course and 120 of us attended it in a lovely restaurant that we had hired for the night. The DJ was spinning great tunes after each course and I had almost forgotten how easy it is to get our friends and family on the dance floor. There is no need for ridiculous amounts of alcohol to loosen their inhibitions ... All of us were dancing, widely different age groups happily mixing together, enjoying old-fashioned Waltzes and Tangos as much as the latest pop anthems, until 5 o'clock in the morning! The French are particularly fond of group dancing to well established choreographed moves - it's difficult to describe but there are some songs (like Bonney M's "Rivers of Babylon") that we seem to know the exact dance routines to and can all perform in perfect synchronization. In many ways, it looks just like a flashmob event or this video that a friend helpfully pointed me towards (thank you D!). I also surprised and embarrassed myself by knowing all the lyrics to some 80s French pop songs I hadn't heard since that era - surely ruining any street cred I had left.

But mainly, the lasting memory I will cherish from that day is the overwhelming love I felt for my brother, for his new wife, for my lovely sister, my mum and dad and all our family and friends - very cheesy I know and ever so American of me to be quite so "in touch with my feelings". But I often feel removed from them because my life is so different to theirs, not only geographically but also in its essence, yet the sense of belonging I felt that day reminded me that I am safely part of a group of people all tied together by an unbreakable bound.
Posted by Stephanie at 10:53 PM No comments: