While surfing the net the other day, I discovered a fascinating fact. There is a secret subway entrance disguised as a walk-up brownstone in Brooklyn. It is unclear to me exactly why - is it to merely blend in the neighbourhood or is this service entrance meant to be truly secret for security reasons?

Regardless of the true reason behind it, I love the fact that one can be walking down a perfectly quiet suburban street and not realize what is hidden behind it. I may have to make a trip out there so see it with my own eyes.

Curbed NY article here.
Posted by Stephanie at 8:57 AM 2 comments:

Email ThisBlogThis!Share to TwitterShare to FacebookShare to Pinterest
Labels: Trivia 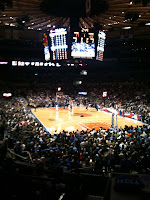 It happened for the first time on a late Sunday afternoon in November ... My friend M took me to see my first Knicks game at Madison Square Garden. Not because either of us are basketball fans but because it had long been a common yet unticked entry on our "things to do in New York" list.

I had no idea how much I would fall in love with the game, or more precisely with watching this particular team in their impressive home venue - surely one of the best event space I know, managing to be at the same time huge yet almost intimate in the sense that even with seats far away from the court, one still doesn't miss a beat of the action or feel in any way removed from it.

I have been to five more games since and each of them only further fueled by new-found passion and I have shared it with different friends every time, eager as I was to share my enthusiasm with them.

Sure the Knicks have not played well in years but I must admit that I love everything about the experience, even when they lose ... The grace of the players, who despite their customary 6'9 frame, move around the court with incredible speed and agility, and sometimes the same lightness of step as ballet dancers ... The fact that, in typical American fashion, the game has been turned into a slightly tacky entertainment show with musical interludes being played throughout - along with dancers, cheerleaders, singers, pizza throwing contests, audience 80s dance-offs and usual celeb spotting courtside providing a spot of light relief between periods and during longer time-outs ... That shouting, screaming and singing ("Defence! Defence!", "Let's go Knicks!") are generally encouraged in the audience during the game and I unashamedly and liberally indulge in all of it.

While it may sound rather distracting from the main reason for being at the game, it's an integral part of the experience of watching basketball at the Garden. I certainly wouldn't have it any other way and I can't wait for the 2010 season to begin!
Posted by Stephanie at 4:15 PM 2 comments:

Email ThisBlogThis!Share to TwitterShare to FacebookShare to Pinterest
Labels: Sports 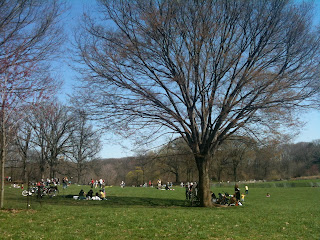 Spring has finally sprung in the City and with it, it seems, my desire to continue blogging about my experiences here. Shorter posts perhaps, but updates nonetheless, is my intention.

To celebrate the mild temperatures and brilliant sunshine, I spent the entire weekend outdoors. Starting with Central Park on Saturday which was so busy that it actually looked like an amusement park with the entire population of New York City (alongside a fair share of bewildered tourists) seemingly milling around its numerous paths and crowding every single patch of green grass available.

E, C & I rented bikes for a couple of hours before settling down for a picnic. I love cycling in the Park. In a little less than an hour it is possible to cover its entire periphery and it's always fascinating to me to see how different it looks as you progress through it - from the crowded area around Columbus Circle, to the lush meadows around the 80s, the sparser expenses of the Harlem Meer and not forgetting the beautiful and serene conservatory gardens of course. I can't imagine ever getting bored of that ride.

On Sunday, I was feeling adventurous and headed to Brooklyn to hang out with L in Prospect Park. I have become a terrible Manhattanite and outer-borough trips are even rarer for me now than ever before. The hour long subway journey was actually not bad, especially as I had planned ahead and taken a few magazines to distract me. And if you discount the fact that a homeless person with a huge dirty blanket almost huddled against me (I didn't want to make him feel self-conscious by moving seats) for most of the trip, it was actually enjoyable. It was worth it regardless - compared to the madness of Central Park, its Brooklyn cousin was positively subdued and L & I wiled away the hours sipping Prosecco and watching entire families, with up to three generations present, playing ball games and enjoying animated barbecues.
Posted by Stephanie at 9:38 PM No comments: