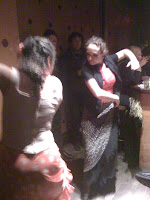 There are few things that make me happier than witnessing newcomers to New York fall in love with it, probably because it re-ignites my own passion for the City every single time.

I was reminded of that fact once again this week as the son of one my parents' friends and his girlfriend stayed with me for a few days. They are both very young (24 and 22 years old respectively) and at first, I was a little nervous about it. I'm not really "au fait" with what kids like these days (especially not french ones) and they are also both countryside lovers rather than city dwellers so I wasn't entirely sure they would actually enjoy their visit.

It certainly didn't look very promising after their first day. I hadn't really given them any advice as they had already planned their itinerary but when they got back to mine that evening, exhausted after doing the tourist sights and complaining about having an atrocious meal near Times Square, I knew that I had to interfere and tell them what to do.

There are some very simple rules to follow when visiting New York to ensure a great visit, which in reverse order are:
5. Spread the obvious tourist sights over several days and don't try to do everything at once - while they are worth seeing and will provide fond memories (the view from the top of the Empire State Building, gazing up at the blinking lights of Times Square, catching a glimpse of the Statue of Liberty for the first time), they are not in any way reflective of what the City is about.
4. Do not ever, ever eat in Times Square or anywhere in its vicinity.An obvious fact for a New Yorker but clearly not for tourists.
3. While I always advocate walking around the City to get a feel for it, there is nothing wrong with hopping in a taxi (or if needs must, the subway) to shorten some of the distances. Manhattan is deceptively large ... on foot.
2. Double the tax to work out the tip in restaurants. And yes, you have to tip when ordering at a bar and when leaving your coat in the cloakroom ($1 per drink/coat).
1. But the number one rule is to ask a New Yorker to draw out an itinerary for you.

I have first hand experience of the importance of this first rule as even though I had visited New York several times before moving here, I never truly discovered it until I became a New Yorker myself.

My favourite places are seldom the ones you find in guide books. I either stumbled upon them by chance, read about them somewhere or, in most cases, my friends here introduced me to them. There is no end to uncovering hidden gems in New York which is why having a New Yorker as a tour guide is so crucial.

In the last few of weeks alone, I have discovered three new spots that I know I will keep going back to over and over again:
- Chelsea Market, housed in an old biscuit factory and home of the TV studios of the Food Network (as well as Google), packs in picturesque little delis and boutiques in an industrial and exposed bricks setting. It is the perfect place to stroll around in with a tall coffee before hitting the Meat Packing district for some serious shopping or as a stop over before walking to the West Village for brunch (or both!).
- N Bar on Crosby street, a tiny bar serving tapas. I have been there three times in as many weeks and during my last visit, my friend Isabelle and I were treated to a live spanish band that miraculously managed to cram a guitarist, a singer and 2 flamenco dancers (whose frantic, rhythmic tap dancing made the floor shake) in a small nook. While it was impossible to hold a conversation during their performance, I loved every minute of it if only because it was so completely unexpected.
- Fat Baby in the Lower East Side. Not a new find as I had been there once shortly after moving here but a completely different experience to my first visit. This time I went with a group of friends on a Friday night, the place was packed and a DJ was spinning brilliant music - the kind that you can not only dance to but also sing along to, as we proceeded to do until the early hours of the morning. So good, that in between dancing my heart out, I could be found hitting the Shazam app on my Iphone to instantly recognize and buy the songs they played on Itunes.

I know that many, many travel guides have been written about New York - but most of them in my experience focus on the obvious sights rather than the City New Yorkers live and breathe in every day.

But without fail, it is my version of the City, the "insider one", that my visitors fall in love with every single time ...
Posted by Stephanie at 6:52 PM No comments: