Sanary-Sur-Mer, tiny fishing village 50 kilometers away from busy Marseilles. Family holiday exactly as we used to have them as children.

The sound of the cigales as soon as we stepped off the train from Paris, via Marseilles. Faint smell of lavender in the warm air. Cypres trees gently swaying in the breeze. Knotted vines precariously clinging onto steep white hills.

Hit by the heady scent of suntan lotion, a blend of vanilla and coconut, as soon as we reach the beach – so distinctive of French beaches in particular.

My brother and sister introducing me to new French Reggae music, while I make them listen to Hotel Costes. Rediscovering the fantastic chilled out beats of the “Harmony Jazz” album (disk 1 only). Making endless lists of songs I still have to buy on iTunes.

Ten whole hours of peaceful, uninterrupted sleep every night as well as the occasional nap in the afternoon on the beach. 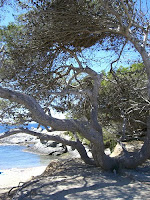 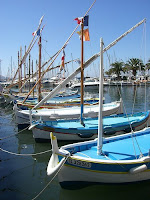 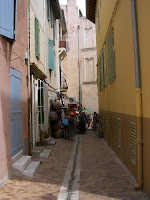 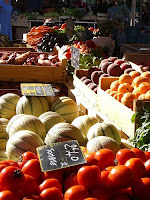 Posted by Stephanie at 7:28 PM No comments:

I've always said that I would never live in Paris. Despite having visited the city a number of times in the past and finding it beautiful, I never felt a kinship to it in the way I do with London or New York.

However, on my way down to the South of France from London, I couldn’t resist stopping over in Paris for a few days to stay with my 24 years old cousin, Jeremy, who lives in a fantastic apartment in the 3rd Arrondissement. My sister joined us and there is absolutely no better way to appreciate a city than to be guided through it by people who live/have lived there.

It seems that living in “New” York made me appreciate the classical and old world beauty of Paris even more with its elegant Haussmanian buildings, perfectly manicured parks and tiny cafes spilling out onto cobbled pedestrian streets. There is a sense of architectural unity, a common look and feel throughout the city, which is just not found in disparate and diverse Manhattan.

I embraced my inner, but often denied, “Frenchness” with much more fervour than I anticipated and fell in love with Paris a little more with each new experience.

Sharing a delicious alfresco dinner in a tiny cobbled street, near the Isle of Saint Louis - drinking Rose wine and unashamedly smoking in between courses. The scene couldn’t have been more typically French unless we had also been wearing berets and biting into raw garlic cloves.

Visiting the “Buttes Chaumond”, an oasis of green and cascading water in the heart of the City, where we took in the sweeping view of the Sacre Coeur and the Eiffel Tour in the distance, after a rather breathtaking hike to the top of the hill.

Stumbling upon a serene and peaceful Medieval garden – the Cluny museum - in the heart of the busy "Quartier Latin".

Having dinner at La Bellevilloise, away from the beaten path, in the 20th Arrondissement - a spacious restaurant, filled with olive trees inside, with an outdoor terrace and a jazz club. We were treated to a live acoustic guitar set by 2 men who took it in turn to sing easy listening hits from Eric Clapton to Jeff Bluckley.
As we walked to the Metro on the way home, we stumbled across an odd little café tucked in the curve of a paved street and the tiny tables set outside enticed us to have one last drink. We ordered a glass of wine, which came in the tiniest balloon glass I have ever seen, and was served by the café owner who had clearly consumed quite a lot of alcohol himself. It felt as if we were in a small village, rather than Paris ....

Finally visiting the Musee D’Orsay, which houses the world’s most important collection of Impressionist Art (my favourite period). It was overwhelming for me to see so many of the paintings I have admired in books for many years all within the same building - from “La Montagne Sainte Victoire” by Cezanne, to “Portrait en bleu” by Van Gogh, “Bal au Moulin de la Galette” by Renoir and “La Laveuse” by Toulouse-Lautrec. I actually got teary eyed more than a few times.

Perusing old and dusty books in a small and quirky English bookstore called “Shakespeare & Co”, opposite Notre Dame at Kilometer Zero (so called because it is the point where all distances to & from Paris are measured). Rows upon rows of books, piled up to the ceiling on precarious looking shelves. A woman playing her own hauntingly beautiful melodies on a piano, crammed in between bookshelves. An upstairs area with more clumsy piles of books, but also beds and chairs for people to read at their leisure. Notes with messages about life, love and pain handwritten by visitors and stuck to the walls or left on tables. It was so inspiring and ever so bohemian that I couldn’t resist leaving a note of my own … I felt compelled to buy some books as a memento of my visit and picked up “The unbearable lightness of being” by Milan Kundera and “A moveable feast” which is Ernest Hemingway’s account of his time as a struggling writer in 1920s Paris.

I think I may have changed my mind about living in Paris one day ... 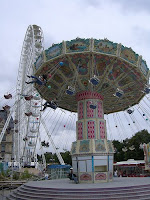 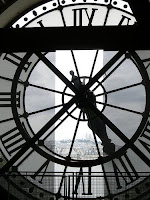 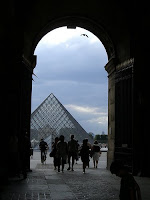 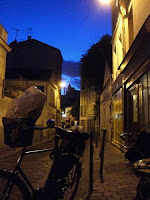 Posted by Stephanie at 6:34 PM No comments:

Since moving to New York, I always make sure that I stop over in London for a few days twice a year, usually on my way back to France to see my family. Having lived there for 12 years, a lot of my "extended" family and very dear friends are there. This time, the trip was little more complicated - I was in London for 5 days, then in Paris for 2 before finally joining my family in the South of France for a week.

Moving to another country is always challenging from a friendship perspective and I must admit that I fear fewer and fewer people will still want to see me as years go by ... although it hasn't been the case so far, thankfully. When I see my London friends again, whether I am in touch with them on a weekly (or sometimes daily) basis via email, or just once in a while, it always feel like we only saw each other yesterday, despite our lives changing and evolving all the time.

I therefore always look forward to going back to London ... although this time I had the distinct impression that London didn't want me there, considering the number of things that went wrong during my short stay.

It all started with the constant rain, grey skies and surprisingly cold temperatures. I had only packed summer dresses (a case of misguided optimism) and was eventually forced to buy a pair of trousers and borrow a friend's coat, after a couple of initial days of shivering, constant cursing and getting soaked to the bones (usually while lugging my heavy suitcase in the streets!).

Things got worse as I moved into my hotel after staying with various friends for a few days. I was staying in a guest house in Belgravia and was given a dark and damp basement bedroom with a tiny bathroom - so small that I felt I was showering in a coffin (an experience I would not recommend!). And with only one towel (not much larger than a hand towel) for the entire 3 day stay, and a TV that wouldn't have looked out of place in a museum, I was close to tears.

Even a trip to Brighton turned into a much less straight forward affair than it should have been. I was making my way down to have dinner with Charlie, one of my oldest friends, but was delayed by over an hour because of violent storms. I finally made it and had a wonderful evening, at the issue of which I thought I had overcome my streak of bad luck ... until I took the train back to London the next morning and got fined $40 for buying the wrong ticket - something that has never, ever happened to me in the numerous times I have made that journey!

As the final touch to a fairly disastrous trip, I realised after leaving London that the Ipod Touch I had bought for a friend of my brother's had been stolen from my luggage, leaving me $400 lighter ...

But I didn't let London (quite literally) dampen my enthusiasm and I had a wonderful time catching up with as many friends as time allowed. It did bring mixed feelings to the surface however: a sense of belonging (enjoying seeing old faces and old places) but of detachment as well (being very aware that it is not where my life is right now).

I feel at home everywhere, yet nowhere in particular at the same time. They say home is where the heart is ... right now I feel that my heart is scattered across France, London and New York. I hope that one day it will settle somewhere finally.
Posted by Stephanie at 10:21 PM No comments: