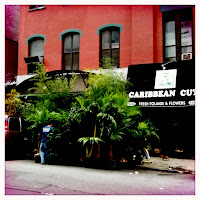 To say that one can never fully know all of what New York has to offer is an understatement.

Just when I felt I had almost gotten there, it managed to surprise me and bring me back to reality - there are still so many things I have yet to experience here. And long may it be this way!

My sister and I stumbled upon the Flower District in Chelsea on our way to brunch with friends. It is located on just one block of 28th Street, between 6th & 7th. But in that small stretch of pavement, you feel transported to another universe - one filled with flowers, shrubs and even palm trees as all the flower shops display their wares right there on the street.

I have no idea why they are all concentrated on this particular block - some of them have clearly been there for a long time. Laurie & I loved the feeling of being in a open-air greenhouse, almost forgetting the noise and bustle of the City, while we strolled in a forest of green. 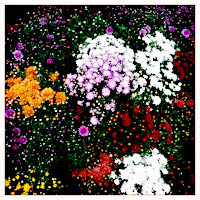 Posted by Stephanie at 4:40 PM No comments: 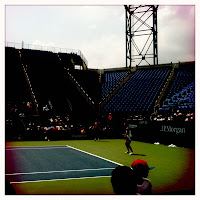 Going to the US Open has long been on my list of things to do in New York.

With the Boy being borderline obsessed with the sport (and practicing it himself), I finally got to tick it off the bucket list.

We took a day off to see some of the pre-tournament qualifying games and also got some tickets to the men's quarter finals which we took my sister to.

Going to Flushing Meadows is a bit of a trek (for a Manhattanite at least) but well worth it. If you don't mind huge crowds, the atmosphere is electric and for me, catching a glimpse of the glittering Empire State Building in the distance while in the Arthur Ashe stadium, made it an unmissable New York experience.
Posted by Stephanie at 4:30 PM No comments: 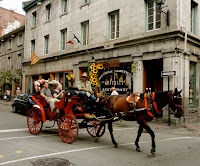 My sister is visiting me for a couple of weeks again - an annual tradition that I hope never dies.

In between making the most out of New York and enjoying a few new experiences (more on that in later posts), we escaped for a few days to Montreal.

I fell in love with the place. It's the perfect mix of small town atmosphere - easily negotiable on foot or bike, with small cobbled streets and tiny cafes - but with big city amenities such as wonderful restaurants and world class museums. It also manages to strike an intriguing balance between European and American sensibilities - one that actually works.

In fact, I loved that people there switched mid-sentence from French to English and back again, without an ounce of self-consciousness. Very much like me when I talk to my sister (who speaks both languages too) and so I finally felt like I wasn't such an oddity after all!

As a quick jaunt from New York (less than 2 hours by plane), I can't recommend it highly enough. 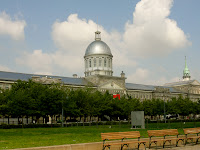 Posted by Stephanie at 4:11 PM No comments: