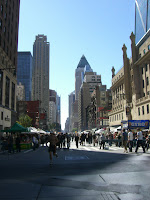 Recipe for a perfect day.

Take two best friends in need of cheering up.

Decide to walk off brunch, with no particular destination in mind or aim other than soaking in the atmosphere of the bustling streets.

Stop over at Columbus Circle and literally bump into the actress playing Hermione in the Harry Potter movies. Fake ignorance but can't help feeling star struck.

Take 8th Avenue down and chance upon one of the last street fairs of the year. Buy freshly made lemonade and check out the various stands. Stop at a palm reader's booth and decide it's a good idea to have your palms read for the first time in your life. Learn that you will both live until 91 and that it's important that you "close the door", which can only be achieved with the help of $125 crystals ... which can handily be bought from the psychic. Politely decline and walk away laughing hysterically.

Continue strolling down 8th, nearing 34th street and decide that you are too far down to stop now. Remember the Bansky exhibition in the West Village that you've been meaning to see and walk until you reach it. Experience the surrealism of the small space, set up as a fake pet store - http://thevillagepetstoreandcharcoalgrill.com

Realise that it is now early evening and that the Meat Packing district and the wonderful rooftop bar of the Gansevoort is not that far.

Sip champagne on said rooftop until the sun sets.

Repeat all the above as often as necessary until blissful happiness is reached again.
Posted by Stephanie at 8:44 PM No comments:

I know I said I love New York over and over again on this blog, to the point that it is probably boring.

But what I failed to mention is that I, and many of my friends, have a love-hate relationship with the City too. As I mentioned before, this is a transient place - most people weren't born here and have come to the City on some kind of quest for the perfect life. Our expectations of New York are very high, higher than they would be of any other cities in the world because in most cases living here is a life-long ambition, a fanciful dream that finally became reality.

And reality is invariably not as glamorous as the dream. Living here doesn't make you happy if you weren't happy before you moved. In many ways, New York has a way of blowing out your previous "unhappiness" (regardless of how small it was before) to new proportions. If you felt lonely before, New York will make you feel lonelier. If you felt you were not achieving enough, New York will make you feel like you are achieving nothing. If you were looking for love ... well, let's not even go there!

It is the City where every single person you meet is an over-achiever. Where it's normal to have pre-dinner drinks with one friend, dinner with another, and post-dinner drinks with someone else. Where we cram everything we can into the very little time we have. Where relationships of any kind are either passionately intense (and therefore short-lived) or dreadfully casual. Where the palpable energy can stimulate you and suck you dry at the same time.

As a few of my friends are leaving the City after 3 or 4 years, disillusioned and exhausted, I am making a conscious effort to enjoy New York until I cannot stand it's frenetic pace anymore. I do feel lucky - I have the career I always wanted to have, friends who love me and are always there for me and I live in a place that provides me with endless excitement and intellectual stimulation.

But New York sometimes has a way to make me look at my half-full glass as decidedly half-empty. Nothing is easy here - you always have to fight for everything, all the time. I have seriously considered leaving the City a couple of times already - going back to more familiar, safer, quieter territory like London.

But a taxi ride from downtown Manhattan to the Upper West Side gets me every time - catching a glimpse of the neon sign on top the New Yorker Hotel, going through Hell's Kitchen's bustling streets, crossing the West Side Highway bridge with it's amazing view of the glittering skyscrapers ... It always makes me realise that I am not quite done with New York yet. It may have thrown me on the floor and kicked me in the guts a couple of times but the battle is not over. 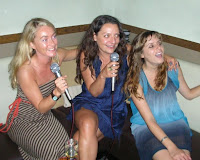 Barack Obama is stalking me ...

He really is. I get almost an email a day from him, his campaign manager or his running mate, Joe Biden. Sometimes even his wife emails me. I admit it is because I have donated to his campaign 3 times now. Of course, the irony of this is that I am not actually "allowed" to donate to a presidential campaign as I am not a US citizen but I ticked the box anyway. I did it because I am absolutely terrified that John Mc Cain will win.

This election is fascinating to me. While I am sure that Obama will not be able to deliver on all his promises, this country has the opportunity to change and show the world that it does not support the terrible decisions Bush made during his tenure, that it is in fact a liberal and progressive country, free of old-fashioned bigotry and prepared to help it's people.

The reality, however, scares me. The country is so divided. Look at an election map showing which states are Democrat or Republican, and you will see a big red area in the middle, while the East and West coasts are resolutely blue. I believe that race is not as important at this stage of the campaign now (it should never have been in the first place of course) and it is now a pure left-wing versus right-wing decision and a matter of who can demonstrate that they have the interest of the "average American" at heart. I am not convinced that Middle America is ready to make the change and cannot imagine the consequences of having yet another aging, conservative leader at its helm.

I am awaiting the 4th of November with bated breath, watching the candidates debates with a passion I haven't felt since Le Pen came close to be elected in France a few years back. I will be starting a new course at NYU next week on the language of American Politics - studying some of the most important political documents and speeches from the days of the Constitution to present time. I'm sure it will be fascinating and will give me more insights into the intriguing political landscape of this country.
Posted by Stephanie at 10:30 AM No comments: