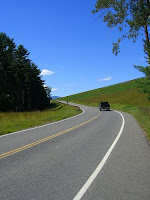 Marie staged an "intervention" on me for Labor Day weekend, a few weeks ago.

I was at least 2 weeks past my "I have to get out of the City" point and was feeling sick and frankly quite low. We had talked about going to the Caribbean that weekend but by the time we looked into it more seriously, the prices had soared so I was bracing myself for a long weekend in New York, while desperately needing some peace and quiet, away from the noise and the energy of this place.

But Marie came to the rescue and called me announcing that she had booked us train tickets to Poughkeepsie and a motel room in Kingston, Upstate New York.

To be honest, we really had no idea where we were going but we were on a mission to relax and take long walks in the woods. Exhausted but excited, we boarded a train from Penn Station to Poughkeepsie at lunch time on Saturday, but not before loading up on a stack of gossip magazines and a copy of the New York Mag of course. The journey itself was great as we travelled north past beautiful lakes and white picket fence houses. I love American trains as they are so large that they almost feel more like a plane. They also have old-fashioned controllers who punch your ticket on the train, which I find so quaint.

We arrived at Poughkeepsie Station where we expected to take a train to Kingston, only to be told that there were none and that we would have to take a 45 minutes taxi trip. Little did we know at the time that it would be one of the many taxi rides we would take that weekend ...

Our motel in Kingston was like the ones you see in the movies - a few buildings of connected rooms, with doors facing the car park but ours had the added advantage of a swimming pool. When we checked in, the clerk asked for our car registration number and when we told her we didn't have one, she looked at us as if we were aliens. We hadn't thought of renting a car, assuming that the country side in the US is the same as in Europe in that you can walk everywhere. How mistaken were we!

We ventured out of our motel only to find a residential street on one side and the motorway on the other. We wanted to find a convenience store to buy water and cigarettes and therefore bravely crossed the motorway on foot ... yes, you read this right. It was quite something ... But there was no store to be found so we went into a pizza restaurant to grab a coffee. The owner chatted to us and upon hearing our plight called his girlfriend (who was on her way over, by car of course) so she could pick up some cigarettes for us! And he refused to let us pay for the coffee ... at least, we found out quickly how friendly people were.

The lack of car was not such an issue in the end however, as we called upon the services of the local taxi company to take us to and from places we wanted to see. They thought we were mad too and perhaps this is a sign that Marie & I have spent too much time in Manhattan already ...

On Sunday, we decided to walk around the Ashokan Reservoir, which provides water to New York City. The size of it took us by surprise as it spans 34km2 but the sense of wide open space was amazing and very calming. We quickly realised that we would only be walking a very small portion of it and strolled along the banks, admiring the lush trees and the completely clear blue sky.
When we were ready to leave we realised much to our horror that we had no mobile phone reception and therefore no means to call a taxi! Thankfully, our driver had originally dropped us off near the only police station in the area (with the words "this will be a safe place for you to come back to", which we laughed at at the time) so we made our way back there and asked the nice police men if we could use their phone ...
We decided to go into Kingston itself, which is a lovely town, set by the Hudson river. The city was in a very cheerful mood as the annual Irish Festival was taking place, meaning that there were a number of stands in the streets and bands performing. I'm not sure how many Irish descendants still remain in the town, but it certainly looked like everyone wanted to be Irish for the day! This made for terrific people watching and it was wonderful to witness the sense of community and neighbourhood of a place where everyone seemed to know each other.

We ended our trip with a long, leisurely boat tour on the Hudson and got back to New York refreshed and ready for City life again.
Posted by Stephanie at 1:01 PM No comments: 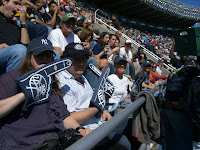 My long-time friends Sam and Claire came into town for a few days and had the genius idea of buying some tickets to see one of last baseball games at the 85 years old Yankee Stadium, which is soon to be demolished (the new stadium is being built just across the road). Although I cannot be described as a sports lover by any stretch of the imagination, I really wanted to go so that at least my first baseball game would be a historic one.

The excitement was palpable as soon as we got off the subway at 161st street - probably the most northern point I have ever been to in the City (cue jokes about me getting a nose bleed of course).

The game had already started but crowds were still slowly making their way into the stadium. There was no doubt that this was indeed a historical moment for die-hard Yankees fans as proved by the 55,000 or so of them who came that day. Our very first stop, once inside, was to the merchandise shop where we bought big foams hands and branded caps. The next stop was at the food counter to get a hotdog and a diet coke. I always said that if I ever saw a game, it would be like an American: waving a big hand in the air and eating junk food.

While I was excited to be there, I fully expected to be bored and leave the game early, rather than stay for the 3 or 4 hours it lasts. Much to my surprise and enjoyment, I was not. I never really got into the game though as I don't understand the rules. Sam patiently tried to explain them to me but my eyes would glaze over each time. Nothing to do with Sam's communication skills at all but my brain is somehow unable to process the rules of sports or card games for that matter! So the excitement I felt came from the atmosphere, the beautiful weather, the constant clapping, singing along to the frequent musical interludes (mostly cheesy 80s anthems - think "Rocky" and "Enter the sandman"), the messages displayed on the huge TV screens (there was a marriage proposal of course) and making as many hand-related jokes as possible.

We did look like complete tourists in our attires and I didn't help matters by asking Sam rather loudly, half way through the game, who the Yankees were actually playing against ... But we didn't care and had a fantastic time.

If enjoying baseball games does not make me sort of an American, I guess that getting the green card I am applying for might ... I promise not to lose any of my French/Britishness though!
Posted by Stephanie at 10:33 PM 1 comment:

Email ThisBlogThis!Share to TwitterShare to FacebookShare to Pinterest
Labels: Sports

Having a Gay Best Friend (GBF) may seem like a terrible cliche, the stereotype side-kick to girls around the world ... But I have always had a GBF from as long as I can remember - although unbeknown to me at times as my first male best friend when I was a teenager was gay but didn't come out until we were in our mid-twenties.

Any girl will understand me - there is nothing better than having a gay guy as one of your closest friends. You love and trust each other to an almost romantic level, but without any messy attraction getting in the way. Yet he is still a man - a man who tells you that you look pretty in that dress or that your hair looks good today, but also tells you that your bum does look rather big in that outfit!
In a way, it is the best of both worlds - you can check out boys together and talk about relationships, yet your GBF will be the one telling you the hard and hurtful truth when a guy is messing with you, whereas your girlfriends will try to understand and make excuses for him (in the very same way you are).

I feel very unapologetic about how much I enjoy hanging out with gay boys, which is why I was very happy to join Larry and some of his friends to watch the New York Gay Pride a few weeks back. The atmosphere was wild as rain poured on the most eclectic set of people I have ever seen gathered in one place - from punks to rastafarians, bikers, yuppies, hipsters, families and OAPs ... all waiving the rainbow flag.

I had a blast, standing up on the banquette of the very packed Duplex (one of NY's flagship gay bars) as I was craning my neck to watch the parade, dancing to classic club anthems and sipping Pride specials (vodka & pink lemonade). We went to a house party afterwards and I remember being perched up high on a fire escape and watching the colourful crowds below causing chaos in the streets while discussing sex and the City (and I don't mean the TV show) with a boy wearing nothing more than a tiny pair of speedos and glittery eye shadow ...
Posted by Stephanie at 5:22 PM No comments: 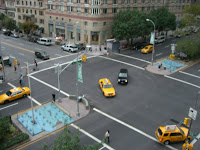 It mainly meant tropical rain and gusty winds but I was amused at the level of high-tech preparation ahead of the storm - which included, as I noticed when looking through my window that morning, some plastic sheets having been placed over the subway grills and held *securely* in place by buckets filled with what looked like sand.

Needless to say I did not take the subway to go downtown for one of my friend's birthday party that evening. The dreadful weather didn't dampen our spirits and we feasted on Korean barbeque at Do Hwa in the West Village, before finishing the party back at his place for some very bad collective singing and rather wobbly dancing.
Posted by Stephanie at 10:21 PM No comments: