It seems that you notice even more how much of a New Yorker you have become after spending a week in London when ...

Your friends are concerned that you are mildly obsessed with Barack Obama because you have read both his books and are recommending them to everyone you talk to, you brought the Time Magazine Special Election Commemorative Issue with you and you explain that you ended a recent casual fling on grounds of "irreconciliable political differences".

You keep calling London "the City" causing many confused looks - while in New York the City refers to Manhattan, in London it is the nickname for the Financial district.

You find an English accent utterly endearing and charming, realising you had somehow become immune to it over the years.

You almost choke when having to pay $120 for a taxi ride from Central London to Essex where you were staying for a night - in New York, this could almost get you to the Hamptons!

You make twice a day pitstops at the Starbucks around the corner from the office for a Tall Black Americano - not because you like their coffee but because it "feels like home".

Your resolution to take the Tube everywhere lasts for less than 24 hours! After that, most of your time is spent desperately looking for a black cab, loudly cursing their elusiveness outside of the city center.

Your face drops when, after spending the night at a friend's in South West London, he suggests that the best way for you to get back to Central London is to take a bus ... a bus! And then you of course spend half an hour looking for a taxi instead.

You think that hanging out with a 6'8 transvestite that you randomly met in a nightclub and talking about the merits of push-up bras is completely normal.

You take an hour train ride from London to Kingston and back and wonder how you managed to do that commute every weekday for nearly 7 years without losing the will to live - it gives a new meaning to the rat race which I don't think I could ever go back to.

When having said that, you find London trains to be very clean but ever so narrow and Londoners to be extremely polite and reserved compared to some of the more colourful characters you have encountered in the New York subway.

You feel that London is too big or at least too spread out compared to Manhattan. I am never more than 20 minutes away from where I want to be, whereas in London going back to wherever I was staying after going out seemed like a mini-adventure, without the reassuring part of knowing I would actually find a way to get home.
Posted by Stephanie at 2:09 PM No comments:

Posted by Stephanie at 10:03 AM No comments: 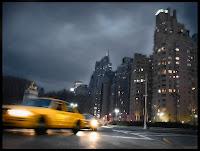 You know you are a New Yorker when ...

You are dreading having to use public transport all the time when back in London for a few days, being so used to taking taxis everywhere.

You suffer a mild panic attack when finding out that a friend of yours is having her birthday party in Brooklyn.

Your friends often ask you for restaurants and bars recommendations, even if they have lived in New York for longer than you have.

You tell taxi drivers to go to "27th and 7th", not bothering to say Avenue or Street, and demand that they take 9th and not Broadway.

You lose all self-consciousness and dance in the street when the first snow falls on the City because that's what everyone else is doing too.

You get upset when your local dry cleaners changes ownership because you had made friends with the previous ones as you went there so often for your laundry.

You avoid 5th Avenue like the plague and shop online instead.

You don't consider a manicure to be an unnecessary luxury but merely a relaxing part of your weekly routine.

You sometimes find that even ordering food in online is too hard of a task.

Your dentist's office was featured in an episode of "Law and Order".

You refer to the Upper West Side as UWS and the Lower East Side as LES.

Your concept of being on time occasionally deteriorates.

You inadvertently crash the private party of a trendy fashion photographer at Bar & Books and end up chatting to Mary Kate Olsen about jeans.

You walk really fast everywhere and get frustrated when tourists can't work out how to use the turnstiles in the subway.

You sometimes feel that your love life could be mistaken for an episode of Sex & The City but not the one ending with "happily ever after". And you're actually OK with that.

You have only used your oven for the first time 18 months after you moved in, cooking Thanksgiving dinner for friends.

You plan your social calendar like a military campaign.

Your bible is the New York Magazine.

You feel guilty about your hedonistic lifestyle but yet can't give it up.

You have a local breakfast place and a local bar where you don't need to order anymore as the waiters know what you want without you asking for it.

.... And you are looking forward to be out of the City for a couple of weeks but also can't wait to come back to it.
Posted by Stephanie at 8:20 PM No comments:

My office is not exactly the kind of a place where laughter is heard much. Rows upon rows of grey cubicles don't seem conducive to it somehow.

Humour does feature but in very cautious, "above the belt" ways, and when I moved to the US I was warned that my days of swearing outloud at work were over as it is very much frowned upon here - at least in the corporate world. It couldn't be more different from London where trading salacious remarks all day long is part and parcel of office life.

While I try my best to be serious and behave in the way that is expected in my position, I find it hard to completely stifle the rather British sense of humour I have acquired in my 10 years of living in the UK.

So for your amusement, I will share some of the most politically incorrect situations I have found myself in.

* During an agency meeting - involving around 6 agency staff working for me, one of my direct reports and my internal business partners (including a VP) - we discussed the relative importance of ad formats in driving conversions. We were concluding that larger ad sizes drove the best results and to my utter disbelief, I found myself exclaiming outloud "well, bigger is usually better!". I just couldn't help myself. Cue much laughter in the meeting room and embarrassed blushing from me. I seem to remember that the VP was still chuckling to himself about it after the meeting was over.

* In a one-to-one meeting with a manager working for me, we were discussing an upcoming Affiliate Marketing conference we were both going to attend in Boston. He told me that they were holding a "meet market" where affiliates and publishers could network and mingle. I couldn't hold a straight face when I told him that I had been to a few "meat markets" in my time and always found them to be much fun.

* In another agency meeting, again involving agency staff and internal business partners, we reviewed targeting in Media buys. One of our media buyers was explaining that some forms of targeting available in the market still have to be vetted from a privacy standpoint and were therefore not quite legal yet. I looked up from the deck we were reviewing and said "barely legal?". I think they are still talking about that one.

* While in a meeting this week, Larry & I were both on our blackberries so I emailed him saying I liked his jumper. He replied asking if I wanted to make out later. We both managed to keep a straight face but still got caught by Larry's VP who jokingly asked us to stop sending love notes to each other in front of a shocked but amused room full of people!

I like to think that my US colleagues have accepted my rather unorthodox comments and ways. If anything, I seem to provide free entertainment from time to time.
Posted by Stephanie at 4:24 PM 3 comments: