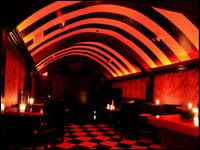 Comedy clubs have always made me nervous.

I always fear that somehow I'm going to be singled out from the crowd and made fun of, or worse be pulled onto the stage!

But I was going through a bit of a tough time and so when my friend CP, who I hadn't seen in a while, invited me to a comedy show at Ella Lounge, I decided to ignore my fears and just go.

Ella is actually your run-of-the-mill lounge in the East Village but on Tuesday nights, Seth Herzog (who is currently the warm-up act on the Jimmy Fallon show) hosts his own comedy night in the dimly lit basement, which sits probably no more than 20 people although that night a good 60 of us crammed into the small space.

While Seth is the main act (and regularly brings his mum on stage for added comedy value), he also invites a great mix of established and new comedians to perform. And, as CP had told me, sometimes brings one of his celebrity friends as MCs.

I must admit that when Justin Long turned out to be the MC that night, I was more than a little excited. The club is so small that he was just a few feet away from us and he was just as charming, down to earth and damn right adorable as his on-screen persona.

With a cover charge of just $5, celebrity MC or not, it is more than worth it and a great way to spend a winter's Tuesday night!
Posted by Stephanie at 5:00 PM No comments: 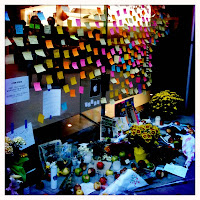 My Macbook, iPod, iPhone and iPad have all made my life easier and dare I say, better.

Thank you.
Posted by Stephanie at 5:31 PM No comments: