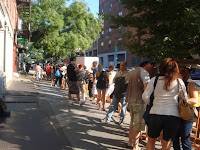 On the few occasions that I have walked past Grimaldi's, steps away from the Brooklyn Bridge in DUMBO, I have always been puzzled and slightly put off by the line of people snaking down the block to get inside.


But in my experience, there is only one thing that New Yorkers are willing to patiently wait in line for and that's great food: Grimaldi's pizzas are widely recognized to be amongst the best ones in town. It is is also one of the few remaining vestiges of a New York of an earlier era - they don't take reservations, do not deliver and never sell pizza by the slice.
It is therefore with some trepidation that my friends and I joined the queue late one Sunday afternoon and we were not disappointed. Entering the restaurant is a little like stepping back in time as the decor doesn't seem to have changed much since it opened. You can easily imagine how it would have been a meeting place for local Italian American families but these days they are very likely to have been pushed out of the now trendy area by rising property prices and the clientele is very mixed.


One side of the room is adorned with black and white pictures of Frank Sinatra (including a mug shot from a police arrest) while the other boasts a myriad of pictures of celebrities and notaries who have graced the establishment with their presence. The wood burning oven takes center stage at the back of the room and watching the flurry of activities, including some pizza dough throwing of course, is fascinating.


We opted for a simple pie - tomato, pepperoni, mozarella and basil - which came on a perfectly thin and deliciously chewy crust. Washed down with a cold and crisp bottle of Pinot Grigio, it was simply heaven. Slightly dazed and confused from the carbohydrate overdose, we left the restaurant and walked across the bridge to get back to Manhattan, stopping every few minutes to take in the breathtaking scenery and wonderfully pink sunset over the City skyline.


The perfect conclusion to a perfect meal. 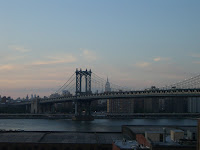 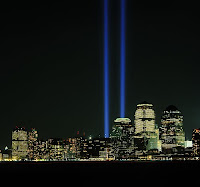 When L, K & I went for dinner and drinks at Roc in Tribeca two nights ago, we thought we knew exactly what our main topic of conversation was going to be. L had just been through a bad experience with a guy and was in need of girl support so we were going to be indulging in one of my favourite past-times of late (I'm sure it's just a phase!): man-bashing.

Which is precisely what we did, fueled by the flowing wine that kept being poured into our glasses by the attentive waiter, while enjoying probably one of the last balmy evenings of the year sitting in the outdoor terrace ... that is until the sun started to set and we noticed two tall blue lights emerging from between buildings, where the World Trade Center would have been. And our conversation took an entirely different turn.

I remember watching a documentary on 9/11 around six months after I moved here. I was catching up on emails late one night with the TV tuned into the Natural Geographic channel in the background. The documentary came on, and while I would have normally opted not to watch it, I found myself not only engrossed by it but also crying uncontrollably.


Like everyone else I remember that day and the shock I felt. But I found myself overcome with new grief and sadness that night. My office at work overlooks Ground Zero so I was surprised by my strong reaction as I am essentially reminded every single day of what happened. But when you live in Manhattan you come to appreciate that, despite the skyscrapers and the wide avenues, it is really just a tiny strip of land and I truly realized for the first time the scale and enormity of what happened to New Yorkers that day.

Both L and K were working in the World Financial Center and hearing their first hand experience of the events of that day was heartbreaking. The panic of the evacuation, the dust they were covered in, being unable to reach their families, seeing people jumping out of the blazing towers (a sight they both still have nightmares about) - these are accounts I had heard on TV but hearing it from two of my best friends made it terrifyingly real. They explained that the terrace we were sitting on right now would have been covered with flyers about missing persons. They told me of the emptiness of the City for the first couple of weeks following the tragedy with no taxis, no public transport, no-one in the streets. A ghost town. A city striken by grief.

Boy troubles obviously paled in comparison. There are much more important things to be concerned about as well as things to be truly thankful for, and our evening, however emotionally intense, helped put everything in perspective.
Photo by richardkingphoto @ flickr.com
Posted by Stephanie at 5:51 PM No comments:

Not, of course, that type of swinging but while looking through some photos I took on my Iphone a few months ago, I remembered some of my favourite music-themed nights out this year which haven't made it onto this blog yet.

A picnic in Central Park is by far my favourite summer past-time. I love the hive of activities that Sheep Meadows becomes as soon as the first rays of sunshine appear. Finding an empty spot, as well as navigating your way through flying frisbees and other airborne implements, can be quite a challenge. But one that I do not mind.
Marie, Larry, Caroline and I had our first picnic in the park back in April on one of the first truly beautiful weekends of the year. Everyone will tell you that it is illegal to drink alcohol in Central Park and if caught, you will be fined. So far, it is a risk that we have been more than prepared to take and we had a wonderful afternoon, whiling away the hours chatting, laughing, eating and, of course, sipping wine.

As the evening dawned, Larry and Caroline decided to go home but Marie and I were of course still full of energy and she took me to the skate circle. I had never been before - it's an area of the park where groups of roller bladers congregate every weekend and dance until late at night. At first, we sat on a patch of grass and watched in awe as the skaters swirled and jumped. But it wasn't long before everyone there, whether skaters or spectators, started to dance together and a couple of guys dragged Marie and I into head spinning routines, the kind of old-fashioned couple dancing that I do with my dad at every family parties. I'm not exactly sure but I think that we stayed there and danced non-stop for four or five hours, amazed at how friendly, fun and eclectic the crowd was. 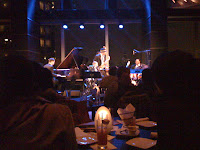 I am a huge fan of little Jimmy Scott, the 84 years old Jazz vocalist whose amazing and almost feminine voice combined with his physical frailty bring me to tears whenever I see him perform.

His live performances are very far and few between now because of his age and ailing health but I was lucky enough to see him at the Dizzy Jazz club at Columbus Circle when I moved here in 2007 and when he came back for a brief stint at the same venue back in April this year, I jumped at the chance and took along music-loving D, who I knew would enjoy it as much as I would.
Little Jimmy did not disappoint even though his set was much shorter than it was even two years ago with just four songs. But he delivered them with such emotional intensity that it sent shivers down my spine and made the evening even more special for me. The venue itself only added to the experience as its huge floor to ceiling windows overlook Central Park and 59th glittering in the night. 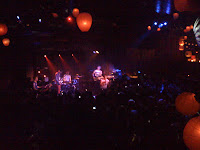 I really like Razorlight - to me, they are very much the epitome of alternative British rock bands: skinny lead singer, dodgy hairstyles, but with solid beats and occasionally thought provoking lyrics.
While they are big in the UK and would normally play at venues the size of Wembley stadium, they are pretty much unknown in the US and Libs, Marie and I got the chance to see them at the Hiro Ballroom, a smallish club in the basement of the Maritime Hotel on the edge of the Meat Packing district.

There were probably no more than a hundred or so people packed in the venue and unsurprisingly, they all seemed to be British. We perched up on the stairs leading to the balcony which afforded us fantastic views of the stage and the band. The atmosphere was electric as they played their original hits ("In America" and "In the morning") alongside tracks from their latest album "Golden Touch" .... and while we may have been feeling too old for the mosh pit, it didn't stop us from jumping up and down and head bang like a bunch of teenage groupies!
Posted by Stephanie at 4:40 PM No comments: