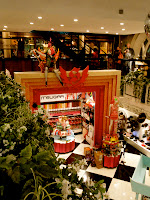 The Limelight Marketplace, a converted 19th century Episcopalian Church in Chelsea on 20th & 6th, opened up a few months ago - interestingly it had also been a trendy but drug filled nightclub throughout the 80s and 90s . I didn't get a chance to check it out until last weekend however when the massive queues to get into Eataly, where we had intended to go, put me and my lovely friend SM (visiting from London) off and we headed there instead.

I didn't know exactly what to expect but it was a much posher affair that I had envisioned. A very modern space, with glossy white surfaces and strategically placed mirrors throughout was created while respecting the building's architectural integrity. There is certainly no mistaking that you are in fact in a church.

The maze of tiny shops sell an eclectic mix of gourmet food items (including delicious ice creams and a small but perfectly formed selection of cheeses), high end gadgets, arts and crafts, and upscale furniture amongst many other treasures.

A few restaurants will soon open as well, including a cozy wine bar on the top floor affording a great view of the shopping arcade below and the much anticipated Manhattan outpost of Grimaldi's, the famous Brooklyn pizza joint.

I know where I will be doing my Christmas shopping from this year! 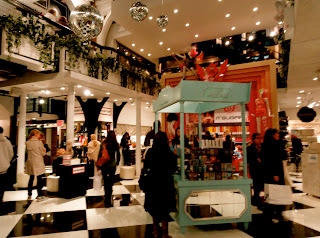 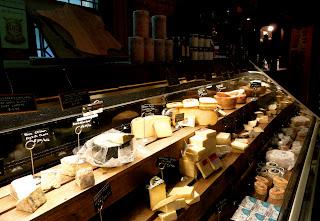 Posted by Stephanie at 8:14 PM

Hey S, haven't been on your site for a while—and, thus, have only just realized that you made your way down into my neighbourhood! Limelight Marketplace, Eataly—all across the street from my school! Next time you're around, give me a ping and we'll grab a coffee together! Amelie

Would love to meet a blogger friend! I will give you a shout when I am next in your wonderful neighbourhood.