Monday 17th March
1.03pm - My friend Marie tells me on gmail chat that she is thinking about going away somewhere hot for the long weekend.
1.07pm - I tell her that I am also desperate for a break in the sun.
1.09pm - Marie exclaims "let's go together!"
2.08pm - We agree to meet in Los Angeles.

Friday 21st March
9.30am - I board my Virgin America flight to LA, in a state of excitement that leaves me almost breathless.

Last minute decisions are the best ones by far.

I had booked us a suite at the Roosevelt Hotel on Hollywood Boulevard, in what seemed to be a fairly central area of LA, which is a difficult thing to work out not only as the city is so spread out that there is no centre as such, but also because I had no time to actually research hotels.

It was everything we could have wanted. Historically, it was were the first Academy Awards were hosted in 1929 and where Marilyn Monroe, Cary Grant and Montgomery Cliff permanently resided. More recently, it is where many episodes of "Entourage" have been filmed and where Lindsay Lohan partied one last time before collapsing and going into rehab.

The pool (complete with David Hockney underwater mural) is where we spent most of our time, only interrupting our sunbathing with a dip in the water or a sip of a champagne cocktail. It's a beautiful space, framed in contrasting primary colours - clear blue sky, dark wood furniture, bright white soft furnishings, vivid green leaves of the palm trees. The Roosevelt is clearly a hot spot for the movie industry judging by the number of people reading scripts by the pool, Vin Diesel drinking at the bar and the 3 writers we saw huddled together, typing furiously on their respective Macbooks.
But mostly, being at the pool was like walking into an Abercrombie & Fitch catalogue. The "square foot to hot men" ratio (a valid scientific measurement) was simply staggering. The women were beautiful too of course, although they all featured fake breasts, carefully styled blonde hair and size zero bottoms.

Yet, despite the "scene", the atmosphere was incredibly laid back and there was a lack of pretence that surprised me. I fully expected to want a liposuction and breast augmentation procedure while I was there, but I never really felt uncomfortable. Perhaps because there were plenty of normal looking people too but also because I felt so removed from it - it was like being in a zoo, catching glimpses of these incredible creatures flexing their impressive muscles while hiding behind the security fence of my dark sunglasses.

On Saturday night, the hotel secured us a table at Ketchup (which I have since learned is the new hip restaurant in town) and we enjoyed a delicious meal, served by an even more delicious waiter. Marie & I were both tired and decided to head back to the hotel pool bar for one last drink. Anyone who knows us both will guess the rest ... A group of very friendly people started talking to us and we ended up having a wild night of partying with them, first at The Standard, then at their poolside cabana, until the early hours of the morning.

On Sunday, after soothing our hangover with a solid room service breakfast and a couple of Mimosas, we were picked up by a chauffeur who took us on a tour of the area in a big Lincoln town-car with tinted windows.
We headed to Griffith Park for a great view of the Hollywood sign and gigantic LA. As we were taking in the sprawling panorama at the observatory, a Mexican guy approached us and gesticulated at his camera. We thought he wanted us to take a picture of him & his friends but instead he wanted to have his picture taken with us! Stunned, we silently complied but barely managed to hold our hysterical laughter & tears before they walked away.
We then drove to Santa Monica where our driver left us to stroll along the crowded promenade of Venice Beach, which was bursting with colourful things and characters: tarot readers, middle-aged oiled up perma-tanned body builders, Johnny Rotten from the Sex Pistols (yes, really), an actual freak show, beggars, hippies, paintings of vaginas ... We felt overwhelmed after an hour or so and headed back to the safety of our car. After a detour in Beverly Hills and Rodeo Drive, we arrived back at the Roosevelt and collapsed in exhaustion.

On Monday we had planned to have lunch at the Ivy but couldn't physically peel ourselves away from the pool and sipped more champagne until it was time for us to head for the airport, slightly tipsy but deliriously happy.

The highlight of our trip however came upon our return. As I landed back in New York from the red-eye flight at 7am, I noticed an email from my sister. Unbeknown to us, a paparazzi had taken a shot of JC Chasez (from N'Sync) and Chase Crawford (from the series "Gossip Girls") at the Roosevelt pool and Marie & I were in the foreground! My sister had randomly stumbled upon the picture while browsing a gossip website!

I can't think of a better, more fitting way, to end a trip to Los Angeles. 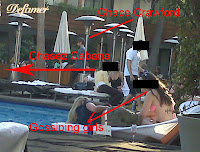 Posted by Stephanie at 9:09 PM

Hello. This post is likeable, and your blog is very interesting, congratulations :-). I will add in my blogroll =). If possible gives a last there on my blog, it is about the Aluguel de Computadores, I hope you enjoy. The address is http://aluguel-de-computadores.blogspot.com. A hug.